So many memories, so many heart pounding moments, and so many classic plays called by Jim Irwin and Max McGee. 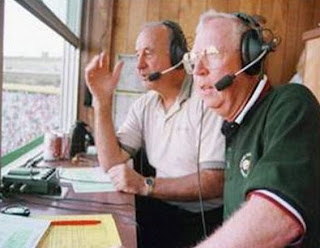 Jim Irwin, 77, who was the radio voice of the Green Bay Packers from 1969 to 1998, died Sunday. His son, Jay, told the Milwaukee Journal Sentinel that his father died of complications of kidney cancer, which was diagnosed in 2010. Jim Irwin had been in hospice care in southern California, where he lived.

Irwin did color commentary alongside Ted Moore and Gary Bender on Packers radio broadcasts from 1969 to 1975, then did the play-by-play alongside Lionel Aldridge, Max McGee and Larry McCarren before retiring at the end of the 1998 season. He was inducted into the Packers Hall of Fame in 2003.