Look who's got the extremist cred's going for himself. Anytime you're standing shoulder to shoulder with an authoritarian militant dictator like Rep. Alan West, you know you've truly crossed over. Welcome guys, to the political rubber room: 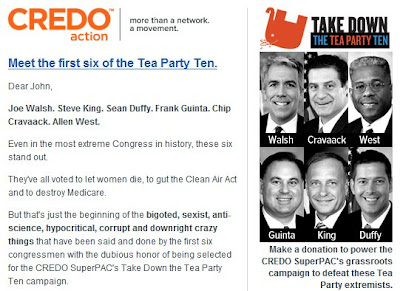 According to CREDO action,

Once a reality TV star on MTV's Real World: Boston, it's clear he has now lost touch with the actual real world. Duffy has complained to constituents that he has trouble paying his bills on his $174,000 Congressional salary. His policies are even more out of touch: He haspraised Gov. Scott Walker and said he is "trying to do right" in Wisconsin. Duffy is a co-sponsor of every anti-choice bill that moved through this Congress, including H.R. 3 which would have redefined rape, and the "Protect Life Act" which would literally let women die in addition to prohibiting federal funds from being to used to cover any part of the costs of any health plan that includes coverage of abortion services.