Let’s face it, Republicans have destroyed the Judicial Branch with activist judges.

All the while Republicans screamed bloody murder over liberal activist judges, they were installing their own conservative activist judges. Yes, it’s opposite day everyday in Republican world. And they're getting away with it. Republicans on the campaign trail have even gone as far as telling voters that they'll replace every judge with a conservative one. And it never gets any press. Yet, the public may be taking notice: 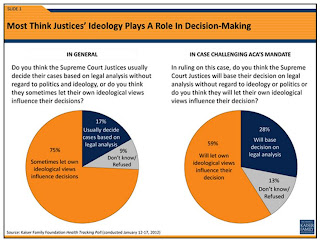 The Kaiser Foundation: With the Supreme Court just two months away from hearing a historic legal challenge to the 2010 health law, nearly 60 percent of the public expects the justices to depend more on personal ideology than a legal analysis of the individual mandate, according to the Kaiser Family Foundation's January health tracking poll.

Just 28 percent of those surveyed believe the justices will base their decision on the mandate without regard to politics and ideology, according to the survey.

Take a look at the abusive authoritarian bullying of our own more liberal justices here in Wisconsin by the conservative majority. There’s no conservative objection to the sad state of our top court's acrimony, because aggressive intimidation is considered leadership now by Republican voters.
Posted by John Peterson, Democurmudgeon at 1/29/2012 12:32:00 PM