Walker thinks Everyone in Wisconsin a Voter!

On the eve of the finalized recall numbers, Scott Walker and Lt. Gov. Rebecca Kleefisch sang...you won't believe it until you see the video, "We Shall Overcome" in the Capitol rotunda celebrating MLK day. It'll stun your senses.

But if anyone thought Kleefisch was the one who held the official title of Administrative Airhead, check out the ultimate in stupid, from her boss Scott Walker:


Walker: "I'm an optimist,  I look at the flip side and say, out of five and half million people, that's a small minority.

OMG! Walker really thinks EVERYONE in the state votes? Hey kids, you can vote too.

When it comes to voters, Walker is only off by about 3.3 million. A little over 2 million voted. About half of the voting age public.

WSJ: The crowd erupted into loud and prolonged cheering when the guest speaker, Sherrilyn Ifill, a University of Maryland law professor, said King would have been against "onerous requirements" that require citizens to show government-issued identification to vote. King rallies in South Carolina and Georgia Monday also focused on such laws, with speakers criticizing them as attempts to suppress the black vote.

Walker, who signed a controversial voter ID law in May, sat stoically through the speech. He exited quickly at the event's end, trailed by a couple of protesters who were stopped by security as they yelled, "Shame! Shame!"

With that in mind, check out how liberal Dane Counties only paper, the conservative Wisconsin State Journal, negatively spun the work of MLK: 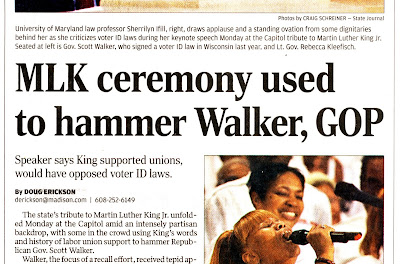