Still feel like throwing more money at our "job creators?" This story is so appalling you'll never want to hear the words "job creators" again. And since consumers are the real job creators, there's little chance the media take the side of labor anytime soon. If a manufacturing state like Pennsylvania is behind bringing in students slaves making a measly $1 to $3.50 an hour, then corporate America is about to usher in a new Dickensian age like America has never seen. 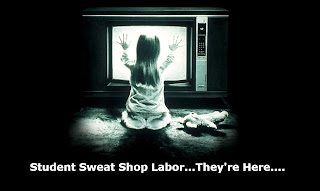 NY Times: According to the State Department, the J-1 visa Summer Work Study program, which allows foreign students to work in the United States for a few months, is meant to promote “lasting and meaningful relationships” between the students and Americans. Try telling that to the more than 300 J-1 holders who went on strike at a Hershey’s distribution plant in Pennsylvania last week, with the support of the National Guestworker Alliance. These engineering majors and future lawyers from places like Turkey, Moldova and China came hoping to travel and speak English, but spent the summer packing and lifting heavy pallets of Kit-Kats, often on overnight shifts and for meager pay.

The America that the Hershey’s workers have seen is surely not the one the J-1 visa was created to promote. But perhaps it is the America we have become. Hershey’s business strategy is a microcosm of the downsizing and subcontracting that so many American companies have pursued during the past few decades in search of ever cheaper labor.

It has become the country’s largest guest worker program. Its “summer work travel” component recruits well over 100,000 international students a year to do menial jobs at dairy farms, resorts and factories — a privilege for which the Hershey’s students shelled out between $3,000 and $6,000. They received $8 an hour, but after fees and deductions, including overpriced rent for crowded housing, they netted between $1 and $3.50 an hour. Hershey’s once had its own unionized workers packing its candy bars, starting at $18 to $30 an hour. Now the company outsources distribution to a non-union company that hires most of its workers from the J-1 program.

The Pennsylvania workers are not alone. Recent exposés by journalists and advocates have found similar abuse of J-1 visa holders at fast food restaurants, amusement parks and even strip clubs. Among other things, Congress should pass the proposed Power Act, which protects immigrants who report workplace abuses from being deported.

In a way, the students at Hershey’s got more insight into the realities of the American economy than they ever could have expected.