Every time this guy opens his mouth, I just want to scream.  A true small government tea party zealot, Johnson is an Ayn Randian free market magic man. Free our corporate people now, and magically consumers will buy anything.
Knowing there are no industrialized countries like the one he envisions, for good reason, Johnson should be required to provide a detailed plan, then a backup plan, and then a backup-backup plan very different from his own, just in case the U.S. goes to hell. Which is not just likely, but a given. When we had partial, voluntary regulations in the private-sector, we got a Great Recession. So lifting all laws and regulations?

Johnson says yes (minus a job creation plan), with a whole lot of projection. 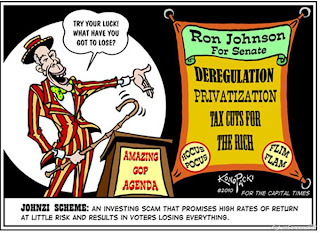 NationalJournal: He accused the president of being “blinded by ideology” and noted that few in the administration have private-sector experience.

Johnson’s proposals include: repealing Dodd-Frank and the Affordable Care Act, streamlining the tax code, creating a "credible" plan to control spending, increasing domestic energy production and imposing a moratorium on new regulations and civil-service hiring. Both the House and Senate should have permanent ‘sunset’ committees focused on eliminating laws and regulations, Johnson wrote. Congress and the administration should be required to make entitlement programs structurally solvent “for 75 years by fiscal 2014.”

When will Wisconsin media start covering this guy in a serious way?
Posted by John Peterson, Democurmudgeon at 8/30/2011 06:26:00 PM