What is it about constitutional conservatives trashing public protests, the people’s right to redress their government, or demand to be heard? It sounds a whole lot like George Will supports authoritarian one party rule to me. He visited Gov. Scott Walker and spoke "fondly" of Wisconsinites.
Should we have called the tea party gatherings a Woodstock redux when they were protesting?
Will not only bashes the citizens right to protest, but goes after private trial lawyers by calling them parasitic. Will never asks himself why laws have to me made against trial lawyers under the guise of tort reform, when in a free market, such regulation would never exist. Lawyers are in private practice, and have every right to freely do what they do best. Survival of the fittest man.
But even worse, Will suggests in the last paragraph, that liberals even expect our drinking water to be free, writing, "free, meaning paid for by someone else." Silly us. 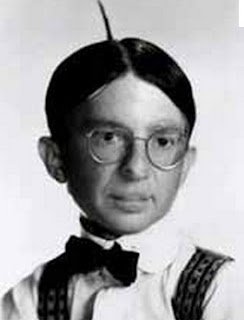 WashingtonPost: The residues of liberalism’s Wisconsin Woodstock — 1960s radicalism redux: operatic lamentations, theatrical demonstrations and electoral futilities — are words of plaintive defiance painted on sidewalks around the state capitol. “Solidarity forever” was perhaps painted by a graduate student forever at the University of Wisconsin. “Repubs steal elections” is an odd accusation from people who, seeking to overturn the 2010 elections, cheered Democratic lawmakers who fled to Illinois — a congenial refuge for labor-subservient Democrats — in order to paralyze the duly elected legislature.

Progressives, eager to discern a victory hidden in their recent failures, suggest that a chastened Walker will not risk further conservatism. Actually, however, his agenda includes another clash with teachers unions over accountability and school choice, and combat over tort reform with another cohort parasitic off bad public policies — trial lawyers.

As the moonless night of fa$ci$m descends on America’s dairyland, sidewalk graffiti next to the statehouse-square drinking fountain darkly warns: “Free water . . . for now.” There, succinctly, is liberalism’s credo: If everything isn’t “free,” meaning paid for by someone else, nothing will be safe.

Labels: George Will, Scott Walker
Email ThisBlogThis!Share to TwitterShare to FacebookShare to Pinterest