Tea Party at Bottom, even below Muslims and Sarah Palin, in public opinion polls.

I guess I'll hold off claiming the GOP has officially become the tea party until we see if public opinion changes a few Republican minds. Fat chance, but I'll wait anyway.
Rachel Maddow is the bearer of bad news, unless you're a tea party member, in which case none of this really matters since public opinion doesn't mean much to authoritarians. 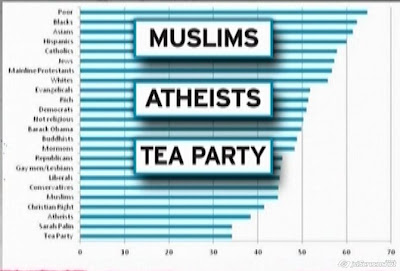 Capitol Hill Blue: The Tea Party is increasingly swimming against the tide of public opinion: among most Americans, even before the furor over the debt limit, its brand was becoming toxic. To embrace the Tea Party carries great political risk for Republican; Tea Party supporters have slipped to 20 percent, while their opponents have more than doubled, to 40 percent.

In data we have recently collected, the Tea Party ranks lower than any of the 23 other groups we asked about — lower than both Republicans and Democrats. It is even less popular than much maligned groups like “atheists” and “Muslims.” Interestingly, one group that approaches it in unpopularity is the Christian Right. Early on, Tea Partiers were often described as nonpartisan political neophytes.

Actually, the Tea Party’s supporters today were highly partisan Republicans long before the Tea Party was born … In fact, past Republican affiliation is the single strongest predictor of Tea Party support today.