Class Warfare that would "produce the greatest increase in poverty and hardship...by any law in modern U.S. history.

If you're still not used to the idea of living on the edge, where one small event could bankrupt you, than maybe this Washington Examiner piece will convince you.


Often you cant get a good thing without paying a bad price. A prime example is our public old-age pension system Social Security. It has been completely successful in wiping out poverty among the elderly. Old ladies no longer have to eat cat food to survive.

But we pay some prices for this. One is a lower savings rate. China has a humongous savings rate in part because it has no reliable old-age pension system. People have to save if they don't want to starve.

What a pleasant possibility? Get used to this drumbeat, there's more to come as the GOP and tea party try to make the idea of starving the non-savers (seniors) an acceptable issue in the debate over our social safety nets. Despite high unemployment, lower wages and increasing health care costs, we're all expected to save more now...more of what I don't know, so we can support ourselves in a dispassionate free market system. 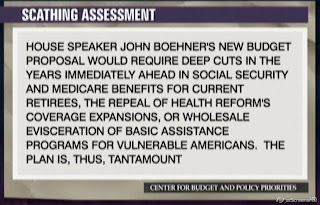 In the United States we got out of the habit of saving. In the decade up to the financial crash of 2008, the U.S. savings rate fell below zero. We felt comfortable borrowing on the supposedly ever-increasing values of our houses to support current and sometimes lavish consumption. Now we're paying the price.

Yes, the middle class was just an illusion, borrowed by a lazy underclass of American dreamers.
Michael Barone,The Examiner's senior political analyst, ends with this "everything but the kitchen sink" warning: 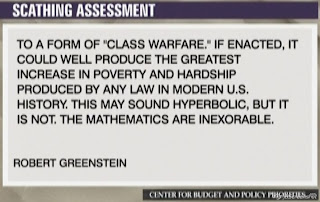 The longer-term price any society pays for a public old-age pension system is lower birthrates. Farmers had large families in order to provide additional labor for their working years and sources of income for their dotage. So did factory workers a century ago … sharply higher tax rates, as Western Europe has shown over the last three decades, reduce long-term economic growth.

Abandon seniors, have large families so the children can pay for their parents old age, and lower tax rates for businesses. That's the America they see.
Posted by John Peterson, Democurmudgeon at 8/28/2011 11:20:00 PM