The GOP Never Includes People in their Jobs Plans.

Isn't it time for the media to be honest about the supposed "jobs plans" put out by the House Republicans? Just as bad, why can't the press be just as critical of the plans put out by the GOP candidates for president?
Take underdog Jon Huntsman's jobs and tax cut plan. Trickle down comes to mind, the kind we never see showering the middle class with jobs and gobs of money. Republicans are only giving corporations and businesses help, or is it my imagination: 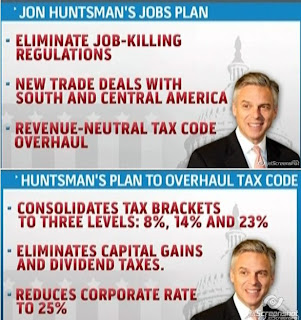 WaPo: Former Utah governor Jon Huntsman debut his jobs plan, his latest attempt to push his way into the conversation. “We need American entrepreneurs not only thinking of products like the iPhone or Segway; we need American workers building those products,” Huntsman will say, according to excerpted remarks. “It’s time for ‘Made in America’ to mean something again.”

Made in America with new trade deals to South and Central America? The definition of insanity...