Walker Recall Signs. Are they legal, despite state laws against them?

Apparently political recall signs, unlike rummage sale signs, is a Constitutionally protected right of political expression. But that’s not what Wisconsin law dictates. Even though… 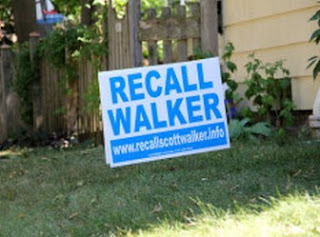 Whitefishbay Patch:The state Government Accountability Board, the agency that handles elections, says yes … State law says election signs may be displayed during the campaign period, which is defined as the period beginning on the first day for circulation of nomination papers by candidates, or the first day on which candidates would circulate nomination papers, and ending on the day of the election.

However, a case brought by the Wisconsin American Civil Liberties Union to the United States District Court for the Eastern District of Wisconsin in 2004 called Fiedorowicz v. City of Pewaukee invalidated any sort of time limit on displaying political signs, according to the ACLU. The ACLU says it is a matter of free speech, and any kind of ordinance prohibiting property owners from placing political signs on private property is clearly unconstitutional, in an article about the court case. "The ACLU urges municipal officials to refrain from enforcing sign ordinances to restrict political expression and to repeal ordinances that limit this venerable form of speech," the ACLU writes in the article.

In Shorewood, Lang said she’s been instructed not to enforce what the state statute says because of the court ruling and said she wonders why the state hasn't changed the law yet.