Republicans Propose Fines for Democrats who Dare hold up Legislation.

The Republicans are showing every legislative sign that they intend to make this a one party government.

They don't want the public to "willy nilly" recall an elected official, essentially removing any shred of responsibility to listen to the people.  They had the remarkable luck to take power when the party in control is able to gerrymander even safer GOP seats for the next ten years.

Now they want to make sure Democratic legislators vote fast and often on bad far right legislation that barely sees the light of day or public debate. If the people spoke when they elected a few extra Republicans to our state legislature, did they not do the same when they elected their Democratic representatives? Doesn't the will of the people count even for the minority? Apparently not. 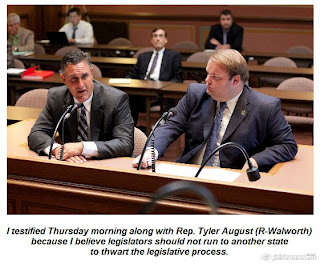 From WKOW News, here's the new "crazy" of the Senate, Frank Lasee, demanding fines for anyone who objects to the will of the "authority" by holding up the vote. According to Lasee's newsletter:


The bill calls for a fine of $500 for any legislator who is absent without an excuse for three or more days. This is to prevent a minority whether Republican or Democratic from thwarting the legislative business.

WKOW: Two state Republicans defended their bill, which they say will prevent lawmakers from fleeing the state like the 14 senate Democrats did to prevent a vote on the collective bargaining bill. Senator Frank Lasee and Representative Tyler August testified in front of the Assembly Committee on Judiciary and Ethics today. Their bill calls for lawmakers who miss three or more days unexcused to be fined 500 dollars.Proceeds from the fines would go to the school fund.