I noticed a nasty little truth about Walker’s job creation record in the numbers reported by Wisconsin Manufacturing Extension Partnership (WEMP). Here’s the sensational headline in the WSJ:

WMEP says it helped create 355 jobs in the last year. 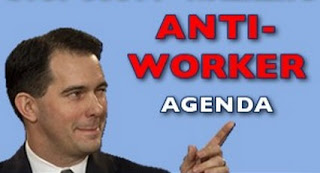 But in the last paragraph, a similar time span but a year before, tells the same story:

Last summer, WMEP reported helping to create at least 337 jobs and retain another 636 around the state in the previous year.