Walker blames Job losses on National economy. But what about the states Open for Business Slogan...tax giveaways...?

When the Great Recession hit, state Republicans were quick to blame Gov. Doyle for the sudden state's job losses. They insisted businesses would flock to Wisconsin, even in a bad economy, if we only had a tax friendly state and tort reform.
Now, it’s the nations fault for Walker's job loss numbers? We should be steam rolling ahead, not “blaming Obama” for everything, right Scott? 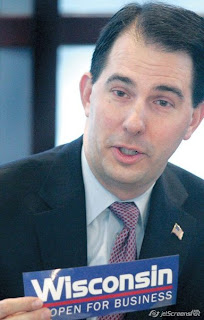 jsonline: Wisconsin lost 12,500 private-sector jobs last month, effectively annulling nearly all of the previous month's gains, according to the latest data from the state Department of Workforce Development. The administration of Gov. Scott Walker attributed the we


… as well as to uncertainty created by the state's special recall elections.
"

What? The recalls forced employers to fire people? Really? Walker is saying just that:


“…combined with July and August, when you saw the height of the recall commercials. And I think for a lot of employers we talked to, that created a high level of uncertainty, not knowing what was going to come next."

But then incredibly, Walker turned around and touted the “certainty” he created….


Walker spoke in Waukesha on Thursday at Weldall Manufacturing Inc.; "In the first six months, the policies we put in place helped create certainty in the state," Walker said.

Just to be clear, “the state's unemployment rate rose to 7.8% in July from 7.6% in June,” so all the bragging hasn't is little more than a smoke screen. 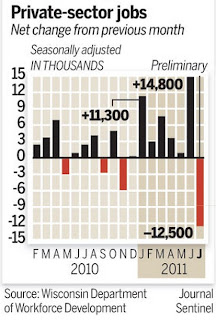 One month ago, Walker announced the increase in private-sector job gains for June, taking credit for shifting the tone of the state's economic debate and creating an economic climate conducive to investment and employment.

Thursday's release revised the June increase upward to a seasonally adjusted gain of 14,800 from the 12,900 that was reported last month in preliminary terms.