Registration and Licensing from the Alien Perspective 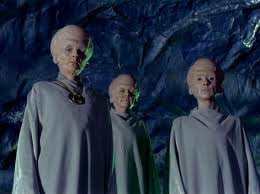 Aliens from a distant galaxy were approaching our solar system. Identifying Earth as the only habitable planet, they came for a closer look. One of the first things they noticed from a great distance was the air traffic and high-speed train movement. Realizing these were conveyances for moving people, they marvelled at the efficiency and complete lack of collisions and near-collisions. The coordination was impressive.

Coming a bit closer they began seeing the cars. Unlike the larger means of transportation, these seemed to be involved in countless mishaps and explosions. Everywhere they looked cars were running into each other and into other objects. The death and destruction was incalculable.

One alien said to the other, since these primitive vehicles are operated by humans, why don't they assign a numerical designation to each one which could be linked to the operator. This way they could easily identify the ones causing all the trouble.

The other alien, scanning the highly-advanced computer system, said, it seems they already have done this. Perhaps it means the quantity of problems has already been reduced to the level we observe.

Coming still closer, but maintaining a distant orbit, they began to observe another phenomenon: gunshots. They recognized these as primitive projectile-ejecting weapons. With each blast their computers registered the event. They watched horrified and amazed that a civilization advanced enough to register all cars and license all car-drivers would allow this.

Wouldn't registering those guns and tying them to the users the way they've done with cars eliminate much of the damage, asked the first alien.