Scott Walker couldn't be happier, and businesses couldn't be more dissatisfied with the Affordable Care Act!!!

Scott Walker is so used to shoveling money over to the wealthy elite, that when they complain about losing their Cadillac health care plans, he’s sad for them. Here’s is deceiving tweet (does he send any other kind?) pictured here. The number is right, but what is business avoiding? 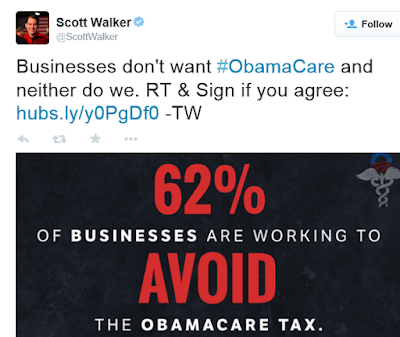 Walker doesn't mention that business hates giving up their Cadillac health plans. But that's crazy. Seriously, business is okay paying in excess of $10,200 for individual insurance coverage, and a jaw dropping $27,500 for family coverage? Talk about wasting money. One right winger tweeted that business gets to write off those premiums as an expense, which is true, but they also have to spend that money first, instead of investing it back into the company or raising wages. Do companies buy the most expensive supplies because they can write it off? Didn't think so, at least none that I've worked for. And yet spending big bucks needlessly on insurance isn't the only thing they're now supposedly whining about:


A new survey finds that nearly two-thirds of businesses facing a new Obamacare tax will change their coverage to avoid it. The survey finds that 62 percent of the nearly 600 companies polled have already taken action or plan to take action to avoid the so-called “Cadillac tax.” For every dollar spent over that threshold (I mentioned above), employers will be hit with an excise tax at a punishing 40 percent rate.

Oh, and did Walker mention that just 2.5% of businesses plan to pay the 40% tax in 2018 when the Cadillac taxes takes effect? On top of the high premiums? Smart?

But here’s the big cry baby rub; business don’t like joining ObamaCare because now they'll have to disclose and report how they’re complying with the law. Sorry, but everybody on the exchange, including me, have had to do just that in order to receive the tax credits and keep the premiums as low as possible. That’s not bad, in fact, it’s good and worth it. Of course with universal care, none of this would be an issue, ever, and businesses could keep a whole lot more money:


Three-in-five respondents reported the law has had a negative impact on their organization; their perception about the law has become more negative. Businesses identified administrative (55.7 percent) and disclosure, reporting, and notification costs (37.5 percent) as their top cost drivers in complying with the law.

So business hates keeping track to get a good deal? How do they stay in business?

Employees Win: Those on the exchange actually like it. So I’m assuming business will follow suit once the myths and fictions are found out to be more of those infamous Republican lies.


Over 98 percent of businesses that provide health care coverage for their full-time workers intend to keep doing so.

It's all about the free market and competition folks: