If it wasn't for the dedicated hard work of our teachers, and the concern they have for our kids, schools would be failing academically right now. It's anybodies guess how long teachers can hold up under the barrage of funding cuts, and the constant character assassination brought about by a bunch of disgruntled republican politicians who still can't get over their bad boy years in high school. 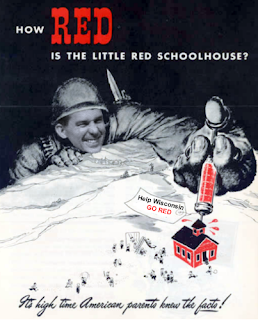 Walker budget puts Wisconsin per-pupil spending below national average: For what could be the first time ever, Wisconsin would fall below the national average in per-pupil K-12 spending if Gov. Scott Walker's budget passes without changes, according to an analysis from a national nonpartisan research group. Only a handful of states, including Wisconsin, are poised to cut education spending in the 2015-'16 school year, according to the commission's analysis.

The vast majority of other states are projected to increase spending between 1% and 3% to account for increasing operational costs such as health care.

Republicans got an earful about the cuts, and they know they’re in deep shit with their own voters if they don’t come up with something. But that may not be enough.

Walker proposed cutting $127 million from K-12 schools in the first year of his budget, which has drawn criticism from districts and the state Department of Public Instruction. Increasingly, parents have rallied to join the call for not just a restoration of the cut — which would bring districts back to where they are this year — but also an increase. A recent statewide poll by Marquette Law School showed 78% of Wisconsin residents disagreed with Walker's $127 million proposed cut to K-12 education.

Republicans are also trying to give the impression that they care about restoring funding, so when they don’t, they can say they tried. Will their voters let them off the hook again?

Leading Republicans pledged to restore funding for K-12 schools as they work through amending Walker's budget.