Carly Fiorina is a corporate failure, and now bullshitting Republican presidential candidate. That can't be good.

Fiorina also has no idea what Common Core is, or how well its been working for my kids and others around Wisconsin. But she does know it gets a few right wingers angry, and that's a vote getter.

Let’s start with her mindless and meaningless Common Core jab: 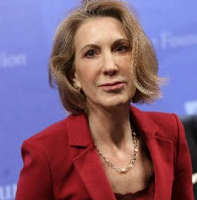 GOP presidential candidate Carly Fiorina said on Sunday she would give Common Core a failing grade for how it teaches American students.

Fiorina, like all Republicans, doesn’t like public education, and lumps all states and school districts into an incredibly misleading talking point:

Our world ranking suffers because we average in a greater proportion of low income, lower scoring children than other countries. Blame supply side economics.

“When a Washington bureaucracy gets involved in program, it becomes heavy-handed and standardized,” she said.

Nothing is standardized, she’s pulling that out of her ass.

Fiorina pointed to China on Sunday as an example of how federal involvement in education could hurt a country’s knowledge base.

Fiorina must not be aware of all the European countries with national curriculum's and tests. Oh, and these countries are always near the top of the rankings.

It doesn’t limit anything, so we can only assume she has no idea what Common Core is. Districts across the nation pick and choose how and what they’ll teach.

I hope reporters start educating themselves about Common Core, vouchers and charter shools.
Posted by John Peterson, Democurmudgeon at 5/31/2015 03:16:00 PM