No wonder conservative voters pick one or two easy issues to focus on, generalities like “freedom and liberty” and “cut taxes.”  If they tried to make sense out of the party’s actual direction and basic principles, they’d go crazy, maybe even vote Democratic.

While cookie cutter republicans across the country push their one size fits all nutritional food stamp check list they say protects against wasting taxpayer money on junk food, they’re gleefully doing just the opposite with school lunches, pushing taxpayer spending on whatever mush they want to dish out to our kids. The Northwestern: 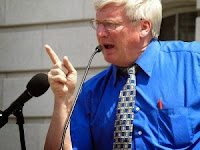 (Rep. Glenn) Grothman, who serves on the House Education and Workforce Committee, got the chance to solicit feedback about federal nutrition guidelines and funding for school lunches.

“I think the people here believe — and I agree with them — that we shouldn't have those rules,” he said. “We should just be able to give the money to the state or give the money to the schools, and they would know what to give the children for lunch. We don’t have to pay a bunch of high-priced people, complete with paperwork, in Washington to micromanage what you’re having for lunch.”

Let's not beat around the bush; the Republican food stamp guidelines are more about reinforcing stereotypes of the poor than any real concern for the cost or nutrition.

Personal NOTE: The banned food makes up over half of my own weekly dinner offerings. And when I was struggling early on in my youth, the banned items made up almost all of the items. But foods are better now. All the things I buy to make our families meals have at least one ingredient banned by republicans.

So why can't you buy food cheaply in quantity, choose to eat healthy pizzas, try to make decent spaghetti sauce (spices are banned), enjoy different flavored canned beans, what’s wrong with this picture. And what about potatoes? Heck, I eat one daily for breakfast mixed with other vegetables…they’re called home fries for gods sake.


This was a list put together by politicians who haven’t cooked or shopped a day in their lives.
Posted by John Peterson, Democurmudgeon at 5/08/2015 08:55:00 PM