So, maybe our activist conservative state supreme court isn't just something dreamed up by Democrats? Getting major notice, our completely dysfunctional and discredited court. And this is just a sample:


New Yorker: The discredit to the court caused by the toothless recusal rule is now unmistakable, as it faces the most controversial legal matter in the state since the 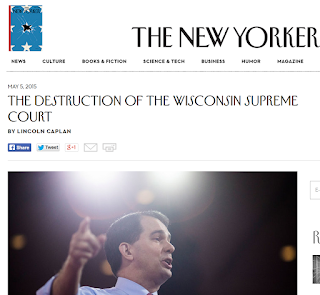 budget-repair/collective-bargaining case. It is about what is known as the second John Doe investigation.

The U.S. Court of Appeals for the Seventh Circuit, in Chicago, immediately stayed that part of the order and, last September, a unanimous panel of three judges overturned the ruling. Frank Easterbrook, a conservative who is one of the country’s most respected judges, wrote the opinion. Calling the lower court’s decision “imprudent” and “unnecessary,” he said that “the policy against federal interference in state litigation is especially strong when the state proceedings are criminal in nature.”

He also emphasized, “No opinion issued by the Supreme Court, or by any court of appeals, establishes (‘clearly’ or otherwise) that the First Amendment forbids regulation of coordination between campaign committees and issue-advocacy groups—let alone that the First Amendment forbids even an inquiry into that topic.” The U.S. Supreme Court is now considering whether to weigh in.

All of the Wisconsin justices look a lot like politicians, in particular the conservatives, who came to the bench with the support of powerful and aggressive political groups. Those justices’ integrity is compromised, as plainly as if they had personally solicited every dollar that helped elect them—and that helped drag the standing of their court so low.