Scott Walker said he would only consider running for president if the Senate flipped to Republicans in 2014. And it did! 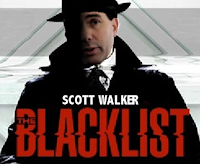 That’s because guys like Walker can’t function without one party rule. One party passage of his one-sided agenda makes him look like an effective leader. But also under his leadership, Walker took the long term approach of crushing the opposition for years to come, using such tactics as his recall petition "blacklist" to character assassinate his targets.

Eyeing the presidency, Walker knows he’ll need every resource to not just hold power, but lessen the threat of dissent nationally that could change the balance of power in congress.

That’s why he opposes any changes to the NSA’s mass surveillance program:

Governor and likely presidential candidate Scott Walker made clear that he does not support a House bill that bans the National Security Agency's mass surveillance program, suggesting the measure goes too far in limiting the government's ability to monitor phone records.

"I think there needs to be the capacity, if we have in America enemy combatants, or people in line with enemy combatants, we need to be able to gain access to information that would help assist us … Congressman Sensenbrenner, I think, is trying to create some sort of balance to make sure the Patriot Act doesn't run out."

"I was absolutely surprised" to hear of the governor's position, Sensenbrenner said ...  "because all of the Wisconsin Republicans in Congress have voted for it and publicly expressed support for it" … it ends the bulk collection of Americans' call records. Sensenbrenner said that, "where I think the governor was misinformed on the USA Freedom Act, is that it does give the NSA access to the materials they need, but the privacy of Americans is protected because the government is not storing the data."

Under Sensenbrenner's bill, the government would not collect the data in bulk but could access data from the phone companies with a court order. The measure passed the House on May 13 on a lopsided bipartisan vote. It is backed by the Obama administration.

"Continuing the present program is not the proper balance between privacy and national security," said Sensenbrenner.

(Sensenbrenner said,) "There is no privacy if the government ends up collecting trillions of phone records made by Americans and storing it for five years."

It's important to remember what Republican, writer and researcher John Dean first saw in Scott Walker, and why he described him this way back in 2012:

About 25 percent of the population has, in varying degrees, the disposition to follow a double high authoritarian, many blindly or simply because it assuages their fears.  And, of course, these are aggressive followers who can attract others who are unaware of the nature of the person they are electing, thus enabling an authoritarian leader like Walker to gain ever-growing control. Good luck, Wisconsin.