Republican Rep. Rob Brooks has apparently never shopped for cheddar cheese. I have, and it's clear he's clueless. He would know that “sharp” cheddar cheese IS the real thing, and the most flavorful authentic choice for the smart shopper. He would also know that many times, “sharp” isn't always that sharp, despite its label. But it beats out the buttery mild and medium cheddar options.

So Brooks is really gutting the true flavor and essence of our state symbol for a 20 to 30 cents per pound savings in FoodShare.

Brooks' bill is as bad as Republican State Rep. Dale Kooyenga’s brilliant bill to repeal the law that guarantees butter on every restaurant table in the dairy state. Yes, he really did attack Wisconsin butter.

Farmers and dairy industry supporters of the GOP were also appalled at this nanny state madness from our Big Government Republicans. Let’s face it, the tired old “stop abuse” “restore integrity” and “get back to the original purpose” excuses just don't cut it anymore.

Just as bad, Brooks is basing his bill on hearsay and anecdotal tales from the checkout line. Those tired old mythical stories where the extravagant poor buy “crab, lobster, shrimp or any other variety of shellfish.” Cap Times:

Rep. Rob Brooks, R-Saukville, cited "anecdotal and perceived abuses," adding that his bill is designed to target abuse, not fraud. "My intent is not to stigmatize, not to shame anyone."

Not fooling anyone, Democrats pointed out the absurdity of this bill: 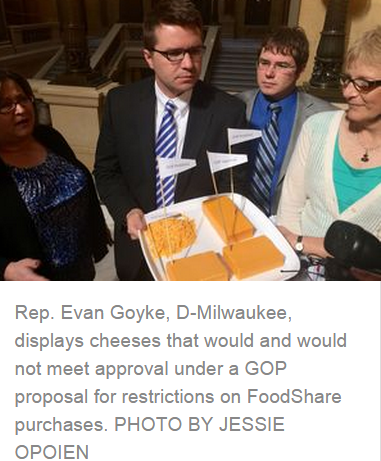 Rep. Evan Goyke, D-Milwaukee, held a platter of four Wisconsin cheeses. All four were cheddar. One was shredded and three were in block form. Three displayed flags that said "GOP Prohibited." One flag said "GOP Approved." The approved cheese was a block of mild cheddar. Two sharp cheddars — one shredded and one block — were not approved. One mild cheddar was not approved because it was too large, Goyke said.

"When you look at something like this cheese plate, there's no evidence of sharp cheddar fraud. People are not buying sharp cheddar in order to defraud FoodShare, and there's no nutritional difference. So if those are the stated goals, the bill is not accomplishing either."

Republicans were also quick to turn on their deep pocketed business supporters to stoke fear and envy in low information conservative votes:


"Though well-intentioned, Assembly Bill 177 is a threat to both job creation in our state and our right to decide for ourselves what to put in our grocery carts," the memo reads. "…the unintended consequences of the proposal will do far more harm than good."

Republicans had no explanation for their lunacy:


"Why in the world would you bar someone from buying shredded cheese vs. a block of cheese?" Goyke asked. "Don't blame the federal government. You wrote a bill that makes a difference between shredded and non-shredded cheese, and then you come to Madison and say, 'Let's let common sense prevail.' How in the world does that make sense?"

This is all symbolic clap trap anyway, but it is a reminder why "block grants," with no federal strings, is on the republican agenda. This is what they want to do on state-by-state level:


No state has received such a waiver … to impose restrictions on food purchases.

I thought this post summed it up well at the Political Environment:


About new WI GOP rules for food stamp recipients: Let's have legislators be drug-tested before they can receive their $44-$88 tax-free daily meal, lodging and housing payments and make sure they are only buying healthy meals with public, entitlement payments.

I put together just a few pages of the complicated upside down nanny state regulations no one in their right mind could keep track of. I mean really, no ketchup? 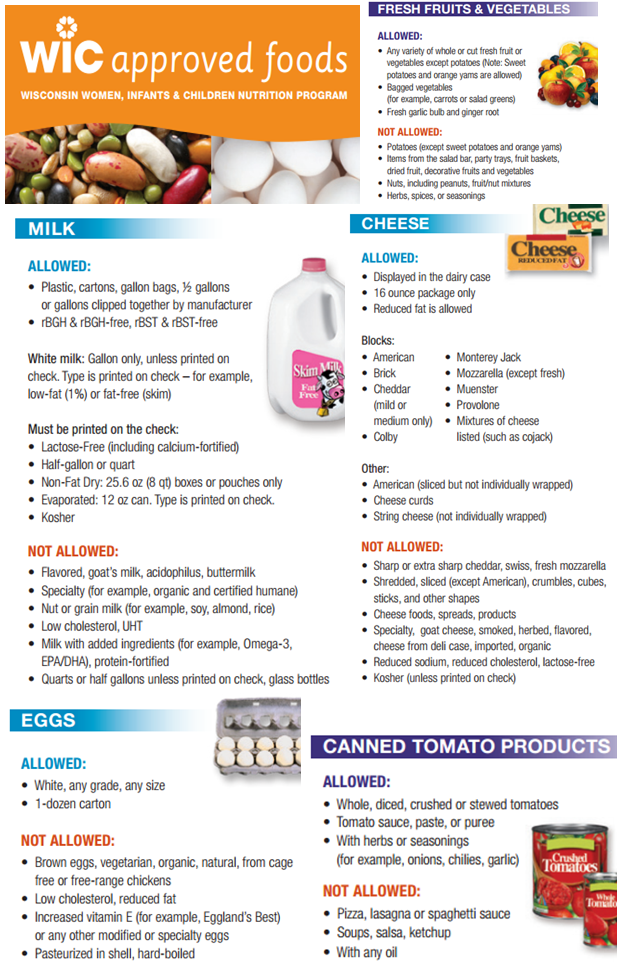