Democrats win over the American public. Now if they can just win elections.

This story demonstrates how completely incompetent Democrats are in energizing Americans around their popular ideas. After all, we've seen two midterm elections where Republicans have beaten Democrats bloody.

Republicans have successfully vilified everything under the empty rhetoric of "freedom and liberty," and selling the general idea that "big government" is bad. But if we dig a lot deeper, it's becomes obvious "bad" includes everything we like, and changes we hope to see.

Let's see if Democrats can now get a coherent message out to voters. Politico: 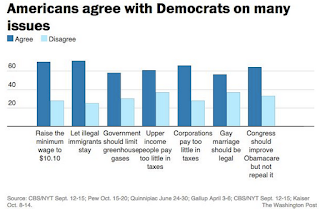 In 2009, 42 percent of those surveyed called themselves very conservative or conservative on social issues, the highest percentage in the data set.

Among Democrats and Democratic ideological leaners, 53 percent say they are socially liberal ... The 53 percent is the highest percentage since Gallup began tracking that number in 2001.

Among Republicans and Republican ideological leaners, 53 percent said they were socially conservative, the lowest percentage since the Gallup began asking that question. In 2009, 67 percent identified themselves as such.