We've been living beyond our means, so Walker is taking our state parks away.

In recent polls, Wisconsinites appear angry over the recent plundering of at least 1 major economic driver, our state parks.


On average, individual trip spending of visitors to these state properties ranged from almost $41 per day (State Forests) to over $90 per day (State Trails). When combined, the local economic impacts of this private sector stimulus within these regions accounted for over 8,200 jobs and $350 million in income for residents of the state of Wisconsin.

They're not "our" state parks anymore: Republican efforts to cut away our public parks will only further divides us. And I believe that's the point. They're not ours anymore. It psychologically distances us from being a part of Wisconsin. We're all getting disconnected and no longer have any skin in the game. All we have left is what we personally own.

On WPR the other day, Rick Esenberg, President and General Counsel of the GOP lawsuit mill Wisconsin Institute for Law & Liberty, clearly articulated the conservative approach to a more "free market" public parks system. If this all seems like an unnecessary and senseless reworking of our public parks, you're not alone. Lon Newman, Executive Director Family Planning Health Services in Central Wisconsin, argued against Esenberg's jaw dropping disregard for anything that reeks of socialism. The caller in this audio clip absolutely nails it.

This is the prevailing attitude by republicans in Scott Walker's Wisconsin. What's frightening? We're powerless to stop it:

Esenberg makes the absurd argument that those in southern Wisconsin shouldn't have to pay for northern state parks. Um, there are parks everywhere in the state the last time I looked, the south too?

We're all paying in now, and we're all benefiting from the money generated by our parks. Public funding also keeps the entry costs down considerably. Here are a few graphs that show how those local business owners and employees, residents, who no longer have to support our parks, reap all the benefits. 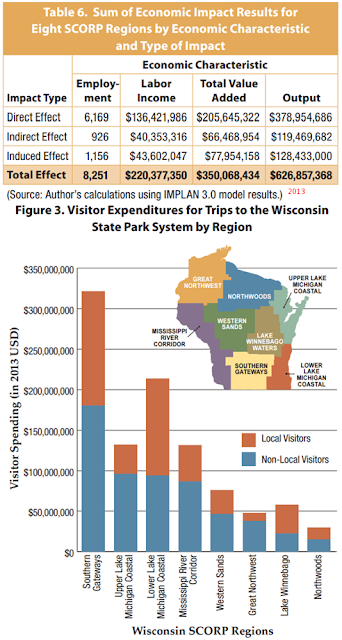 "Moving to more of a user-based system is very appropriate," said Sen. Tom Tiffany (R-Hazelhurst), a member of the Joint Finance Committee that recommended the changes.

Shift to Wisconsin state park self-sufficiency … could include more alliances with the private sector and naming rights at some park venues. Nationally, state parks haven't been able to fund their entire operations with money collected from campers, hikers and other users. Instead, other state park systems have had to tap tax dollars or other sources of public funds, according to data from the National Association of State Parks Directors. In Wisconsin, 28% of parks operations are currently funded from the state's general fund … $16.7 million in annual funding of all types.

Sen. Howard Marklein (R-Spring Green), the author of the changes, said market forces should dictate price increases. This is especially so in the most popular parks, such Devil's Lake and Peninsula, where occupancy rates in the summer are above 90%.

Just came across this audio from the Devil's Advocates radio show where the same "philosophical" argument was being made. Too bad about everyone else: