Upside down and as confused as ever, career politician Scott Walker really doesn't see how his own preemptive war policy, known as the Bush Doctrine, got us into Iraq for all the wrong reasons in the first place. 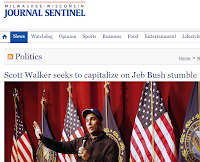 That became obvious when Walker decided to attack Jeb Bush for saying he would still support invading Iraq knowing what he knows now. That's the thing about preemption, the facts and unintended consequences only become known later. That's what made Jeb's comment so horrific.

And that's what makes Walker's political one-upsmanship of Jeb Bush so ridiculous and dangerously clueless. jsonline:


Fresh off a trip to Israel, Wisconsin Gov. Scott Walker said that the U.S. invasion of Iraq doesn't hold up in hindsight. "Any president would have likely taken the same action Bush did with the information he had, even (then U.S. Sen.) Hillary Clinton voted for it, but knowing what we know now, we should not have gone into Iraq," Walker said in his statement.

And like George Bush, Walker will make the case for preemptive war, not knowing what we will only know after the fact, having learned nothing from the past.