Walker's twisted mess of a lie about the EPA's Clean Power Plan, and the simple truth that will save lives. 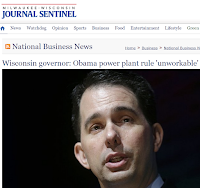 Walker complained that the proposed rule was “riddled with inaccuracies” and “questionable assumptions” that made it unworkable for his state.

Why aren't reporters asking Walker "what inaccuracies" and "questionable assumptions?"

Walker, like Rep. John Boehner, are the ones "with inaccuracies ... questionable assumptions." PolitiFact explained it this way:


In the days leading up to the EPA’s June 2 announcement, the U.S. Chamber of Commerce released a study saying the regulations -- which hadn’t even been made public at that point -- would hurt jobs and economy ... but the study’s authors made several critical assumptions that turned out to be incorrect ... (1) they assumed Obama would want to decrease carbon emissions by 42 percent — not 30 percent — before 2030. (2) The chamber also predicted that by 2022, the EPA would have to require natural gas plants to install carbon capture and storage, a much more costly technology, to reach the 42 percent threshold. The EPA already said last year that new natural gas plants would not need to include carbon capture in their facilities.

That same morning, House Speaker John Boehner’s website claimed, "The president’s plan would indeed cause a surge in electricity bills — costs stand to go up $17 billion every year." Boehner’s evidence was the chamber study.

Walker said in his letter to Obama that compliance with the rule could cost Wisconsin as much as $13.4 billion and raise electricity rates in the state by 29 percent.

What Walker failed to fully mention was the actual estimate range by the PSC; $3.1 billion to $13.4! But the PSC is now filled with Walker cronies, so who would believe anything they said?

Besides the fact that our state utilities are making the switch-over anyway, I thought the following costly energy company expense didn't get the same phony outrage from Republicans:


State regulators on Thursday gave We Energies the go-ahead to make changes at its new coal plant in Oak Creek to enable it to burn coal from Wyoming ... but it also adds $100 million in spending to a coal plant that We Energies and its partner utilities spent more than $2.3 billion to build.

So coal from Wyoming is cheaper, and will "reduce fuel costs and save money for utility customers over time." What? Eastern coal is more expensive? But coal is supposed to be cheap, saving us all on our energy costs:


The new coal plant was designed to burn coal mined in the eastern United States, but the price of that coal has surged in recent years because of exports to China and other countries.

Aren't Republicans also trying to pass laws allowing the export of cheap U.S. natural gas too? I wonder if that will go up in price too?

Walker opposes the Clean Power Plan based on a faulty disproved study by the U.S. Chamber of Commerce. And like the true psychopath we know Scott Walker to be, here's an even better reason to support the EPA plan:


A study from Harvard and Syracuse universities released this week said reducing carbon dioxide from the nation's power plants will save about 3,500 lives a year by cutting back on other types of pollution as well. Much of the benefit would occur in four states that are severely polluted by coal-fired power plants, the study says: Pennsylvania, Ohio, Texas and Illinois. The new regulation would reduce hospitalizations by 1,000 a year and heart attacks by 220 a year, the study says.

How can Walker say he's pro-life, when he opposes policy that could save 3,500 Americans from premature deaths a year. That's one 9/11 a year. There's more too:


Reducing carbon emissions also will cut levels of other dangerous pollutants such as fine particles and ozone by more than 25%. Thus the plan brings substantial and measurable public health benefits ... worth from $55 billion to $93 billion per year by 2030, an amount that greatly exceeds the estimated compliance costs of $7.3 billion to $8.8 billion a year.

Walker's jobs failure easy to predict: Walker isn't open to all businesses, especially those not getting GOP support, and his jobs promise failure is proof:


Lori Compas: In Iowa, solar energy companies can sell power directly to customers, creating jobs and boosting investment in the solar sector, and more than a quarter of the state's electricity comes from wind-generated power.

Michigan's skilled workforce has been revitalized by the renewable energy industry, with more than 76,000 workers employed as part of the green economy and more than 10,000 people directly employed by solar and wind companies in the state, according to the Natural Resource Defense Council.

But while other Midwestern states are forging ahead, Wisconsin recently has rolled back renewable energy goals and allowed monopolies and outdated regulations to hamper the growth of the renewable energy sector. And our three largest utilities are actually de-incentivizing renewable energy by proposing unprecedented rate increases.

As for Obama's supposed overreach and illegal EPA mandate:


When Congress last updated this section of the Clean Air Act in 1990, the House and Senate each passed its own set of amendments, But the Democratic-controlled committee screwed up: It failed to harmonize the House and Senate language in section 111(d), and both versions were accidentally signed into law. Only the House version ended up in the statute books. The House version plainly prohibits the EPA from issuing its climate rule. The Senate version, however, says that the EPA can regulate existing plants using section 111(d) so long as the pollutant being regulated isn't toxic. Under the Clean Air Act, carbon dioxide isn't a "toxic pollutant," so the Senate version gives the EPA the authority it wants. the EPA's lawyers, argue that the discrepancy creates a conflict that renders the statute ambiguous. And when a statutory provision is ambiguous, the courts defer to the agency's interpretation so long as it is reasonable. Murray Energy and its 14 state allies (including Wisconsin) disagree. They argue that only the House amendment banning the Clean Power Plan should apply because the Senate amendment was a mere clerical error. That's because the EPA is trying to get the case thrown out on a procedural technicality — usually a rule needs to be final before it can be challenged in court, and the Clean Power Plan isn't final yet.

The highlighted section above could easily apply to the Affordable Care Act's line about federal subsidies not applying, now challenged in the Supreme Court.