Finally, at least one Republican candidate for president may have to answer for his own failed economic policy, Scott Walker. Here's a sample of that coverage: 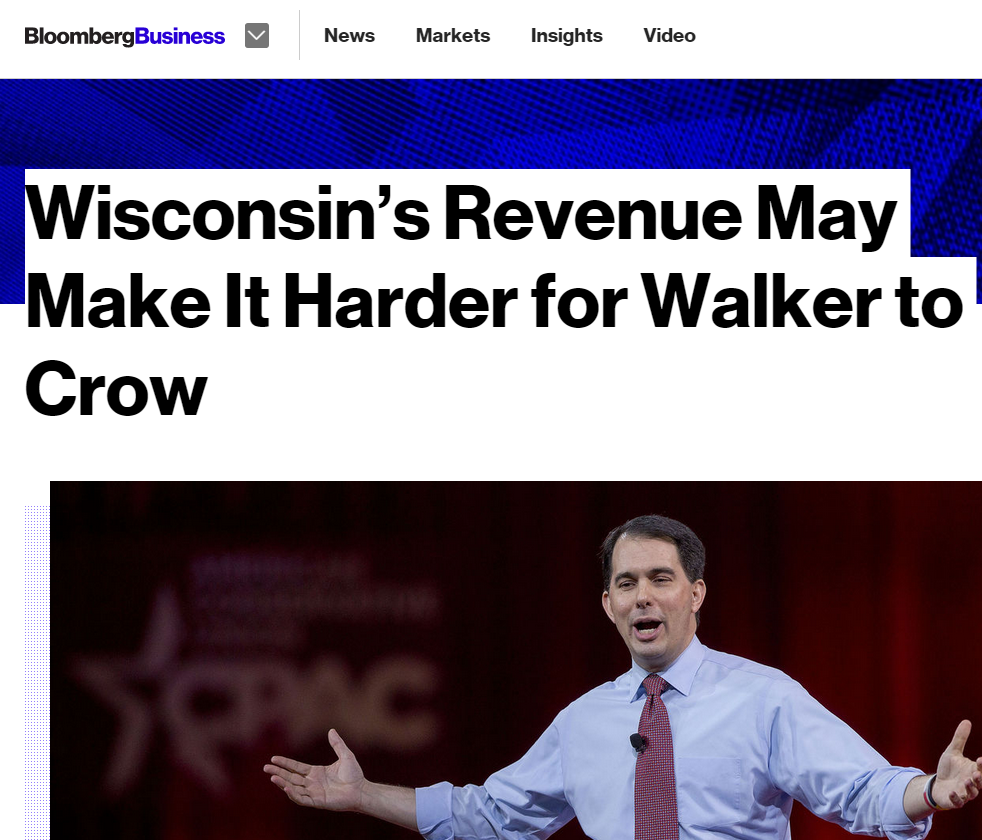 Bloomberg Business: Wisconsin’s projected tax collections … a blow as the potential Republican presidential candidate presents his state as a laboratory for limited government … a more robust forecast could've softened unpopular trims to primary and secondary education as well as the University of Wisconsin.

The state’s nonpartisan Legislative Fiscal Bureau: “If there is any additional revenue in the current year, it will likely be offset by reduced growth rates.”

Outside Wisconsin, the second-term governor presents his state as a model for the fiscal philosophy favored by his party’s core voters and top donors.

Democrats blamed Walker’s policies for the budget challenges: “With his complete failure to grow our economy, a deeply unpopular budget, and plummeting approval numbers, I get why the governor would rather be in any other state but Wisconsin,” Senator Jon Erpenbach said in a statement. Without changes, the state faces a shortfall that may reach $2.2 billion in two years starting in July, according to Walker’s analysts. Tax cuts supported by Walker and Medicaid spending contributed to the deficit.

While republicans talk about halting or getting rid of laws that don't work, they're not talking about their failed policies. Democrats have a logical and better idea:

But that kind of flexibility isn't possible. Republicans are on ideological autopilot:

Legislative leaders said they wouldn't delay the phase-in of previous tax cuts or stop expansion of private taxpayer-funded voucher schools to undo more of the $300 million in proposed cuts to the University of Wisconsin System over two years. "For those of us who have been crossing our fingers and going to church on Sunday, it didn't work," Vos said of the flat tax projections. "We'll figure a way to make it all work out in the end."  Bob Lang, the veteran head of the fiscal bureau, said that tax revenue for this fiscal year is running behind projections by about 0.4 percentage points, or about $60 million.

Here's coverage from WISC and WKOW:


Always a blistering critique from PoliticusUSA, and Sarah Jones: 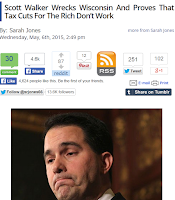 PoliticusUSA: Governor Scott Walker (R-WI) promised Wisconsinites that he could jump start the economy with tax cuts for big business, even though this Republican economic model was partially responsible for the recession from which the state — and indeed the nation — was suffering. Just days ago, the Republican Governor trolled President Obama, claiming the country needed Walker’s “pro-growth economic policies”. Enter crazy Republican math, stage right. Things are not adding up for Walker’s budget.

The state’s GDP growth and personal income growth have trailed the national rate. Republicans have tried to blame Democrats for the economic failure of their policies by saying they were in charge “for many years”, but PolitiFact threw water on that false notion.

Sane people who can add would be thinking maybe we won’t roll out our additional tax cuts to manufacturing and farm businesses that started in 2011, especially because it turns out that the tax credits are going to cost “at least $275 million in additional lost tax collections over the next biennium, or more than double what was originally estimated.”