Hanging out at the Conservative Tribune online I found out why the labor participation rate is so low; retiring baby boomers. Look at the graph and years of high participation, it's pretty obvious.(the image was already blurry)

The story itself never made that claim, but instead whined about the participation rate and blamed Obama, saying he was successfully turning the U.S. into a welfare nation.

I'm posting this because I thought it was funny, and because of the blatantly juvenile way they went after Obama: 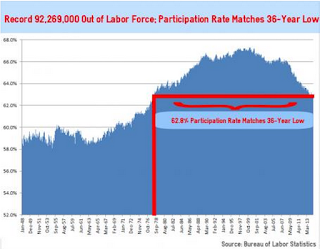 The U.S. workforce now has the fewest number of laborers since 1978. For the first time ever the number of Americans 16 and older who can work but don’t has exceeded 93 million.

Obama’s plans to turn the greatest nation into a welfare nation appear to be working.

The participation rate in the economy has dropped from 62.8 percent to 62.7 percent, a 37-year low. The BLS determines the number of workforce-able people as those who are 16 years and older.

But what about all of the millions who can work but don’t? The BLS claims that the largest factor is the aging baby boomer generation (H/T cnsnews.com). “The baby boomers’ exit from the prime-aged workforce and their movement into older age groups will lower the overall labor force participation rate, leading to a slowdown in the growth of the labor force,” explained the BLS.

Here's the next line, and the lunacy that is the right wing...

But then, none of this should really surprise anyone. Obama has been increasingly encouraging illegals and able-bodied-but-lazy Americans to join the welfare state and let the U.S. government care for their needs while they sit on the couch and watch reruns. And vote Democrat.

Share this if you think Obama is intentionally ruining our great nation by encouraging Americans to depend on government handouts instead of their own God-given ability to provide for themselves.