Liberal Cult is coming to get you....

Republicans and their loyal right wing-nut voters have always had an odd way of describing "liberals." It was always a dark cartoon caricature of what they hoped we were like, so they could hate us without conscience.

Oddly, liberals for some reason share the same traits as the staunchest tea party conservative. The simple explanation; projection. As defined, conservatives attribute their own repressed thoughts onto someone else, like liberals.

Thanks to a link in an anonymous comment, here's one of the great Bizarro World rants about the "liberal cult." Even I'm afraid of these liberals, where ever they might be hiding. Priceless: 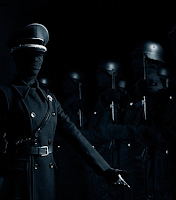 Is Liberalism a Cult? ABSOLUTELY!!!  By Rod Eccles

The other day, I was watching a program about the Church of Scientology. The program was not particularly flattering to Scientology.  In fact, the documentary was downright disparaging. The conclusion of the documentary, although the producers did not come out and actually say it, was that Scientology was nothing more than a flashy, well-funded cult. That got me to thinking about religion in general. You see, all of the world’s major religions have one thing in common. That commonality is the fact that there is a greater being outside of yourself and humanity. Some call that factor God, The Great Spirit, Gaia etc.

Cults have one thing in common. Their commonality is that the leader or leaders of the order believe themselves to be the great being that has come to live in human form.  Indeed, they often call themselves God.  For the most part, true religions have an uplifting message. Even if you don’t agree with that message, it is still there. Cults would have you believe that there is nothing positive to look forward to outside of the cult leader.

This is where politics comes in. You see Liberalism is nothing more than a cult.  It is probably not the world’s largest cult but it is a cult none the less. Liberalism doesn’t believe in a greater being outside of themselves.  Often Liberals are atheist or agnostic and thus they only believe in themselves and those who lead the cult. Liberals believe that there is no hope outside of the cult, or government. That the cult has to be grown to ever bigger levels in order to achieve the utopia that is, in reality, impossible to achieve.

Liberalism is born out of the idea that man is helpless without those deemed to be smarter than the masses. In fact those so-called smart leaders are only smarter than the masses because those leaders tell us they are smarter. There is no real evidence that those leaders of the Liberal Cult are actually smarter than a 5th grader. Liberals tell us that in their cult, and only within their cult, will man get the best health care, the highest wages, the best housing, the cleanest planet and the safest non-violent and completely united world of nations bannered under one government. Liberals tell us that basic human rights, such as the right to defend thy self against bodily harm is wrong and should be left solely to those whom the Liberal Cult deems as its guardians. The Liberal Cult tells us time and time again that the right to freely speak your mind should be limited to ideas in which the Liberal Cult agrees. Forget having a deviating opinion.  That is frowned upon by the Liberal Cult.

The Liberal Cult demands that we stop the war on drugs and make most currently illegal drugs legal. At the same time they call for ever increasing amounts of money and trained professionals to deal with those who have become hopelessly addicted to the drugs that the Cult wants to now make legal. The Liberal Cult continues to blame everyone but the Cult for the failures of their own ideas. In no way can the Cult admit to failure.  Their claim is always that there is not enough of others people’s money being spent on the program they say will cure the ill. If a child fails a math test, the Liberal Cult will tell you it is not the fault of the Cult’s idea but that a child should be allowed to think that 2+2=5.  The Cult will say that we did not spend enough money on the administration, the school building, the teacher and text book and that because we won’t spend double what we are already spending, it is the fault of everyone not in the Cult.

In the Liberal Cult there is no room for dissenting thought or actions. In fact if you don’t believe as the cult does, they will brand you a racist, a sexist, a bigot, a homophobe.  You will be labeled a greedy, money loving capitalist even though you earn less than and give more to charity than the Liberal Cultist. Your religion will be labeled stale and outdated and that newer religions that are more violent and hateful are the way to go. If you are a Liberal Cultist you don’t believe in logic, in facts, in true history. You only believe in feelings, your own feelings, and you force public and private policy upon everyone based on your feelings alone. Simply because you believe you are smarter and wiser than anyone else who is outside the Cult.

We all can look at cults and say that cults in general are a bad idea and are bad for the individual involved.  So why is it we fully accept the Cult of Liberalism even though it is probably the most dangerous cult the planet has ever seen?