The EZ tax form is just that, pretty easy to use. I'll bet you anything people will still hate filling it out because the real paper work isn't the form, it's keeping track of, and organizing your statements. That means no matter how easy we make it, they still won't like filling it out.

So the only ones whining about the "aggravating mess" of our tax code, are the ones who are doing everything they can not to pay their taxes.

Don't get me wrong, I'm all for the important small business deductions that help the struggling entrepreneur, but it's those tax avoidance laws lobbied for and put in place by the wealthy elite that go well beyond what is fair. And that's at the heart of the cliched cartoon below along with the included Wisconsin State Journal editorial.

EZ filers aren't the beleaguered complainers, so why are we feeling sorry for the tax dodgers who've shifted the tax burden onto us? 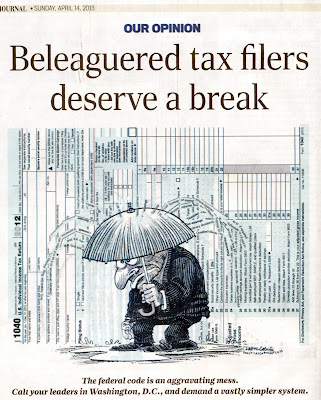 The truth is, the corporate tax rate has never been lower. Here's why from Think Progress:


Republicans and corporations often repeat the talking point that America has the highest corporate tax rate in the world, and while that is true for the nation’s 35 percent marginal rate, it doesn’t tell the entire story of American taxation. The U.S. collects less in corporate tax revenue as a percentage of GDP than all but one other industrialized country, and even as corporate profits hit a 60-year high in 2011, the effective corporate tax rate hit a 40-year low. Corporations haven’t paid an effective rate that equals the 35 percent top marginal rate in more than four decades.

Labels: Tax
Email ThisBlogThis!Share to TwitterShare to FacebookShare to Pinterest