Wisconsin has State Sen. Frank Lasee, Maine has Governor Paul LaPage. This is just to bizarre, from Think Progress:

Reported by Mike Tipping with the Bangor Daily News, LePage told the Skowhegan Area Chamber of Commerce on Tuesday:


Now, to add insult to injury, The University of Maine, Presque Isle — 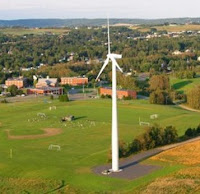 anybody here been up there to see that damn windmill in the back yard? Guess what, if it’s not blowing wind outside and they have somebody visiting the campus, they have a little electric motor that turns the blades. I’m serious. They have an electric motor so they can show people that wind power works. Unbelievable. And that’s the government that you have here in the state of Maine.

Asked about this curious claim, the University spokesperson’s first response was to literally laugh out loud. There is no motor. The project is actually a success story for the university, and for Maine. This was the first mid-sized turbine installed by a university in the state, has a 600 kilowatt capacity, and has produced 680,000 kwh worth of clean electricity in its first year. That’s $100,000 off the University of Maine at Preque Isle’s utility bill, and 572 tons of CO2 not burned into the atmosphere.