D.C's school district turned in incredible test scores the very first year Michelle Rhee became the Chancellor. There are now questions whether principals and teachers felt so threatened with the loss of their jobs that they cheated to improve test scores. Rhee is a test zealot, and pressure from her could have pushed many over the edge. Big surprise. Another reason a balanced approach makes more sense.

Rhee's 15 minutes of fame may be over finally:

USA Today: The publication of a 2009 memo written by a data analyst who said that there were suspicions that nearly 200 teachers had cheated on 2008 standardized tests in the District. The cheating concerns arise from Michelle Rhee’s 2008-2010 tenure in the District.

The memo was released by independent journalist John Merrow — who  chronicled 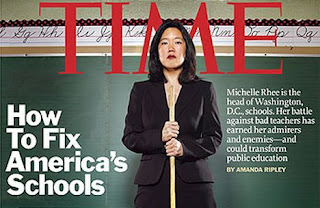 Rhee’s D.C. tenure in a “Frontline” segment for PBS earlier this year — as part of a post on his Taking Note blog titled “Michelle Rhee’s Reign of Error.” It starts with this note: Michelle A. Rhee, America’s most famous school reformer, was fully aware of the extent of the problem when she glossed over what appeared to be widespread cheating during her first year as Schools Chancellor in Washington, DC.  A long-buried confidential memo suggests that the problem was far more serious than kids copying off other kids’ answer sheets.  Twice in just four pages the consultant suggests that Rhee’s own principals, some of whom she had hired, may have been responsible (“Could the erasures in some cases have been done by someone other than the students and the teachers?”).

Rhee has publicly maintained that, if bureaucratic red tape hadn’t gotten in the way, she would have investigated the erasures.

As John Merrow concluded, Rhee’s overzealous fixation on testing and measurement, and her efforts to silence and fire anyone who questioned her reckless, destabilizing strategies, ultimately failed D.C.’s kids. Under Rhee’s tenure, DC-CAS scores showed little or no gain, and the performance gap between low-income and upper-income students actually widened. Schools were destabilized by the constant churn of teachers and principals being fired, relocated or leaving out of frustration. Our children deserved better.