Republican State Sen. Glenn Grothman is so wonderfully ridiculous, that we should appreciate the way he exposes the upside-down, convoluted logic so prevalent in his party. I love the way his press releases are written in the third person, as if his office is some kind of reporting service.


Actually, Grothman’s nonsensical thinking is so common place now on the right, that few even bother asking “why?” Get a load of the following Grothmanesque logic: 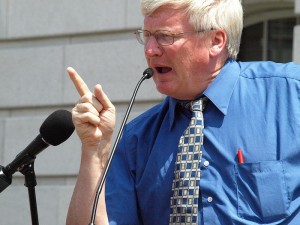 System have known all along, that even with an inefficiently run system full of diversity programs, new buildings and thousands of employees who never see a classroom, the University was unable spend the massive 5.5% tuition increase they received in each of the last two years.”

If the UW were “inefficiently” run, would even have a surplus? For years Grothman and his fellow lousy managers of taxpayer dollar have targeted, defunded and criticized one of the state’s biggest successes and money makers. How does that make sense?

Whether you agree with the tuition increases or not, “diversity programs, new buildings and thousands of employees” sounds like a successful and growing public college, not to mention the kind of job creator the state needs right now. Republicans hates it when government succeeds, because it shouldn't.

There's no question legislators should determine what a fair surplus should be for the UW, and put a freeze on tuition until something is worked out. A long look at past UW spending and future projects should be part of the mix too, but not retribution.

Grothman's opportunism is laughable, as he “apologizes” for the tuition increases he and his fellow Republicans caused through funding cuts to the UW over the last decade. Now he cares about student debt?

“I would like to apologize to the students who have been graduating with an average student debt of over $25,000 per year in the past two years for the UW overcharging them.”

The actual surplus in the rainy day fund is around $207 million, which may just be way too much, but the rest is allocated for future projects. It's all about Republican outrage, which is just what Rep. Steve Nass and Robin Vos are plotting now. Nass' solution? Freeze tuition for four years, even before reviewing all the details, and a call to the Board of Regents to fire President Kevin Reilly. Nass isn't the brightest bulb in the assembly, if you haven't already noticed.

The UW is a business. It has to plan for growth and future spending, all the while maintaining its place as a top rated college nationally. That’s competition, something I thought Republicans loved to create.

Democratic Rep. Cory Mason also objects to tuition increases in light of the surpluses. But sadly, a more measured pro-student approach is not part of his plan either.

Is there hope that Wisconsin can reverse the damage inflicted by Walker and the Republican majority someday? Well, it's not looking good right now. Of course it would help if the Democratic Party had an actionable platform they could carry out as doggedly as their Republican counterparts.

The Legislative Fiscal Bureau's suggestions seemed right on the mark:


However, there are important policy questions raised by these balances, including:

1. What is the appropriate level of UW System appropriation balances?

2. What role, if any, should the Legislature have in determining the appropriate level, and use of, UW System appropriation balances?

3. To what extent should the Board of Regents be permitted to charge current students tuition to fund programs that will benefit future students?