If you wanted to know just how serious a problem we have with creeping fascism, and how close we are to a corporate takeover of our country, this amazing insight into the tactics being used should strike fear into even free marketers. It can happen here, and maybe is right now....

Truthout: The Chinese Government and the Rightwing mega-lobbying group calling itself the U.S. Chamber of Commerce have in common … both interested in hacking into the computer networks of their perceived political opponents and appear to be using very similar techniques and tools to do so, as The Nation's Lee Fang reported on Monday.


Readers of The BRAD BLOG will likely remember the emails hacked by Anonymous in February of 2011 revealing that three U.S. government defense contractors had been working with U.S. Chamber of Commerce attorneys from the Washington D.C. lobbying/law firm of Hunton & Williams to develop a $12 million scheme to target their political opponents --- such as unions and progressive organizations --- by hacking into their computer networks, infiltrating the groups, planting false information in hopes of discrediting them, and using other sophisticated computer tools developed for the "War on Terror" by the three cyber-security firms. 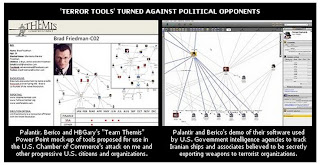 PowerPoint presentation for the U.S. Chamber prepared by "Team Themis," the name used for the illicit project by the three government contractors, HBGary Federal, Palintir, and Berico … the Chamber denied having knowledge of the specific cyber-terror threat clearly being created on their behalf by the three defense contractors, and even as neither they nor their attorneys have yet to face any accountability for the scheme to terrorize public organizations and private individuals, such as myself and my family.