The Intellectual Giants at The Wisconsin Institute for Law & Liberty...want to be taken seriously with a name like that? Advocate no Accountability to Taxpayers.

You've got to be kidding? There’s an actual group with the cheesy name “The Wisconsin Institute for Law and Liberty?” Gee, think they’re conservative? My god that's embarrassing.

It's another faux pro-education voucher support group asking the important question, “are vouchers constitutional?” But no one is asking that question. Instead opponents of vouchers are pointing out how big a failure they've been the last 20 years. Oh well, here’s their grandiose positioning statement anyway:

Wheeler Report: The Wisconsin Institute for Law and Liberty (“WILL”) has released a report, “The Story 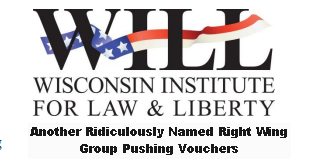 of School Choice – Constitutional Challenges and Victories,” that provides a brief –but thorough – description of relevant Supreme Court cases on school choice. It seeks to rebut the unfounded attacks on the school choice program … opposition forces have questioned the program’s constitutionality.

That sounds serious...if it were true, but wait…The Wisconsin Institute for Law and Liberty (I’m nearly out of breath saying their name) doesn't really mean what it just said:

These are expressed, not as claims that school choice violates the state or federal constitution, but as a vague raising of “questions” and identification of “issues.” There is a reason for such obfuscation. As the report shows, there are no questions and there is no issue regarding the constitutionality of choice expansion.

And that’s all there is. I’m not kidding, and I don’t believe this is a practical joke by The Onion or Anonymous either.

Thank god we can rely on The Wisconsin Institute for Law and Liberty for staying alert, and asking those questions no one else is asking.

As always, WILL remains vigilant in its defense of the Constitution, the rule of law, and truth in public discourse.

Looks like we dodged another assault on our freedoms and liberties.

Their position is very clear, and could be a huge sore spot for taxpayers; they don't want to be accountable to taxpayers, they just want to take their money.


The Wisconsin Supreme Court has long … held that simply giving public money to parents who, in turn, direct it to choice schools does not automatically turn those private schools into public schools. Most importantly, parents ensure accountability of the program by carefully evaluating which school provides the best education ... empowering parents over bureaucrats and having a healthy competition among schools.

Wisconsin taxpayers should stop their whining, and throw money at private voucher schools, because the parents of kids there will be our watchdogs?  Amazing.