Turns out "Freeloading" 47% of Americans pay lots of taxes, and don't benefit at all from Republican Tax Cuts.

Few surprises here, but I love the proof offered up recently; Check out libertarian John Stossel unintentionally trash the myth 47% don't pay taxes. He was trying to make the case for a simplified tax code and blew it, as usual. This is hilarious and exhibit A:

But tax cut proposals like the one Scott Walker wants, is just digging us deeper in the hole when it comes to providing any economic stimulus. What can you do with $2 spread out over a year...are you kidding:


Tax Cuts mean trouble for states: I, for one, side with Oliver Wendell Holmes, who said, "Taxes are the price we pay for a civilized society." In fact, I would go further; they are 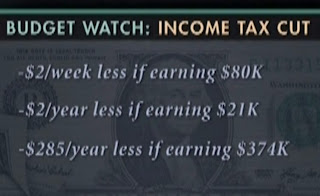 an investment we make in our common future. While it's no mystery why tax cuts are popular among lawmakers, a different question is much more important: Does cutting taxes actually help spur economic growth as proponents of lower taxes argue?

The likely answer is no; A look at the last two decades of state income tax cuts around the country suggests that the governor's proposal could do more harm than good.

The Center on Budget and Policy Priorities, a nonpartisan think tank published a report in which researchers examined the track records of states that cut personal income taxes in the 1990s and 2000s. States that cut taxes lagged the rest of the country in economic growth. In the five states that made the deepest cuts in the 1990s, jobs grew at less than a third the rate of all other states over the next economic cycle.

Similarly, six states cut income taxes significantly between 2000 and 2007 (when the recession hit). Three of those six states experienced slower economic growth than the rest of the country in the years that followed. The other three are all major oil-producing states that benefited from a spike in oil prices.

While it is being billed as a middle-class tax cut, the top 14% of tax filers will get half of the benefit, while everybody else is left holding the bag, with reduced funding for their schools and a variety of critical local services … As it turns out, the poorest among us, who derive virtually no benefit from the governor's proposal, pay a higher percentage of their income for taxes than the wealthiest when you factor in all of the other kinds of state and local taxes. This is on top of the fact that the poorest saw their taxes increase in the last budget.-Ken Taylor is executive director of Wisconsin Council on Children and Families.