It's the police and litigation state of Wisconsin. Didn't we just protect corporations from lawsuits, frivolous or otherwise, with tort reform?


Yes. But suing the public, by business…are you getting it yet? 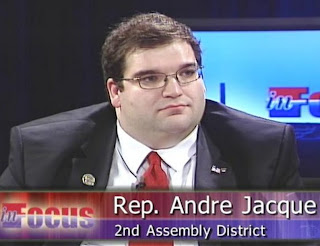 I thought all that legal stuff just got in the way of doing business? This just might be the tip of the lawsuit iceberg where Republicans tip the scales in favor of businesses in the courts.

Police state/litigation state, Republican style. Sadly, a few of our dumbest and apparently punitive Democratic lawmakers bought into the scheme as well. They need challengers and shown the exit.

What other way can we drain Wisconsinites of their hard earned money to benefit business and slow the economy? Don’t worry, Republicans are working on that as we speak. When Rep. Andre Jacque starts looking like a legislative genius, there’s really nothing left to protest.

jsonline: A Wisconsin Assembly committee has passed a bill that would allow bar or liquor store owners to sue minors who use fake IDs to buy alcohol illegally … Under the legislation from Rep. Andre Jacque (R-DePere), those cited for underage drinking would be subject to a small claims court fine of $1,000 to the bar or liquor store owner if they use a fake ID. Retailers must provide notice of the law and immediately report violations.

Parents would be responsible for the $1000 fine when minors are involved. The bill has garnered support from both Democrats and Republicans.

These comments were worth thinking about:

Wait, if you know it's a fake ID then it's illegal to sell the minor the booze. If you do your due diligence and the ID still ends up beings fake, the business isn't on the hook for any fines or liquor licenses suspension. What would they actually be suing for, wasting the employee’s time?

Good idea as long as people are allowed to sue bars that serve intoxicated patrons.