900 Workers feel the effects of Sequester, and end of Wars in Oshkosh.

More bad news for Scott Walker, who made the politically ridiculous prediction of creating 250,000 jobs in his first four years. While some said that this was a safe prediction for a normally recovery economy, we didn't have that. After all, we just went through the Great Recession. A more modest estimate would have been more honest, and not as hyperbolic as Walker's. But honesty doesn't give you the edge in an election.

With the sequesters dramatic cuts to military spending, and the end to unnecessary wars, Wisconsin is   about to experience massive job layoffs by the Oshkosh Corporation.

Republican voters will continue to repeat the popular talking point that the sequester had no real affect, despite the proof below, but facts are troublesome things I hope the Democrats will mention often.

jsonline: With the war in Afghanistan winding down, Oshkosh Corp. last week said it 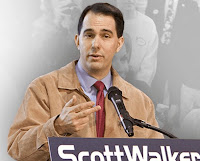 would lay off 900 workers this summer - about 25% of the company's defense division work force - ending a four-year hiring spree.

Ralph Gunderson, a UW-Oshkosh business professor (said), "This is kind of a bursting of our bubble." The city of 66,000 residents is a blue-collar town that has seen its share of big layoffs over the years, such as the hundreds of jobs lost at clothing-maker OshKosh B'Gosh during the past decade. There also have been other major layoffs in the region in the past year, including 780 people at the Thermo Fisher Scientific plant in Two Rivers and 250 at Brillion Iron Works in Brillion.

"We have lost furniture-makers, window-makers and wood products firms. We will get through it, I guess. But 900 people are going to have a hard time finding a job that pays the same wages as Oshkosh."

The immediate impact on the laid-off workers will spread to other businesses, from restaurants to real estate firms that depend on spending by Oshkosh employees.