The Dark Age of Walker: When a road is a road, and a bridge just an ugly bridge. "No Tax Pledge" strips Aesthetics from beautifying Wisconsin due to lack of funding. Tourism next?

There goes the neighborhood.


This is just too short sighted and horrendous to imagine happening in Wisconsin.

jsonline-Patrick Marley: Republican lawmakers are making a move to end a state Department of Transportation program that funnels up to $15 million a year into murals, landscaping, stamped concrete and other aesthetic features (that) ensure community buy-in for road and bridge projects. The GOP lawmakers are also targeting for elimination plans to install color-changing decorative lights on Milwaukee's Hoan Bridge. They say money for such projects should go toward roads.

"I don't think it's a time where we can afford all of the extras," said Rep. Jim Steineke (R-Kaukauna).

We should change our slogan to “Open for Business, we just look like shit.” 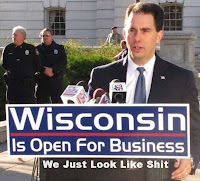 gets residents on board with major projects that become defining features in their communities. They say the program also helps attract more businesses … Green Bay Mayor Jim Schmitt praised how the program … Having aesthetically pleasing roads and bridges gives visitors a good first impression of his city and helps invite higher-quality development, he said. "We do not want to look like a concrete jungle," he said. "We do not want to take the cheap way out."

But the no tax pledge to an out-of-state special interest group is preventing Republicans from increasing fees and taxes, at a time when they should, and technology and gas mileage is changing. Who needs “embellishments:”


Rep. John Nygren said his committee would seek ways to find savings for transportation and "scrutinize the need for 'embellishments.'

Instead of being able to adapt to change, Republicans instead are backing away from real solutions:

"A legislative task force earlier this year determined the state faces a $6.8 billion funding gap over the next decade for transportation infrastructure and recommended raising taxes and fees to cover it.

Steineke said he couldn't ask taxpayers to pay more for roads while the community-sensitive design program remained in place. He acknowledged the program accounted for comparatively small amount of money - about 1.5% of highway construction - but said that money would be better spent on additional road projects.