We should be guaranteed Butter in our restaurants, schools, hospitals and prisons. Period!!! We’re the DAIRY STATE for gods sake. 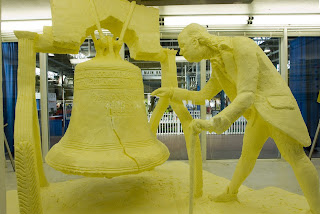 Ever wonder why there’s always a dish of little butter things in a bowl on your table at restaurants? I have. And I’ve always welcomed the chance to break away from the boring margarine I use at home, for that one chance to relish the special sweet rich flavor of butter when I go out to eat.
Forget all that now. A young history deficient accountant, now a tea party representative, wants to short change the Dairy State’s sale of butter with blocks and tubs of hardened oil. In the DAIRY STATE of all places.

WSJ: A quirky Wisconsin law intended to protect the state's dairy industry by making it illegal for restaurants to serve margarine as a replacement for butter is being targeted for repeal … loophole: Restaurants can abide by it simply by serving both butter and margarine.

What is it about dumb-ass Republican accountants (dumb Ron Johnson is one too):

Silly and anti-free market? What the hell is he talking about? It doesn’t stop anyones ability to ask for margarine, or buy it at the store if they're so addicted. In fact, it’s not an issue:


Pete Hanson, director of government relations for the Wisconsin Restaurant Association. It's simply not an issue, he said. "Restaurant owners are in business and are successful because they give customers what they want and in Wisconsin that's generally butter," Hanson said. "I don't think there necessarily needs to be a law requiring butter to be on the table. I think most patrons in Wisconsin prefer butter."

Oh but there is a need for another new law from the party that hates regulations.

The law Kooyenga seeks to replace also requires that butter be served to students, patients and inmates at state institutions, except as necessary for the health of the person. In accordance with the law, butter is served to the roughly 21,000 inmates in Wisconsin's prisons. Kooyenga argues that changing the law would save the state money since margarine is typically a third of the cost of butter.

Yeah for proposing a more convoluted law to replace the “old” butter law on the books. Let's give everyone unhealthy cheap trans-fat loaded hardened oil to clog up their arteries.
I’m wondering how the Wisconsin dairy industry is going to like losing its place at the table. Will their profits just melt away?
Posted by John Peterson, Democurmudgeon at 9/20/2011 04:42:00 PM