Rep. Steve Nass (nah-s) is the poster thug of the Republican Party.

But does anyone care? I've never seen a better example of where a Republican dominated government is headed, and its authoritarian disciplinary control over every aspect of our lives.

Who would have thought protesting ones government would be a safety concern for lawmakers, and needed to be stopped with force? Who would have concluded that a show of force against peaceful protesters would result in a more compliant public?


Rep. Stephen Nass is calling for the review that could result in a possible removal from Tubbs' position. Nass said, "By not doing anything, by treating them with kid gloves, that made it worse. If they'd done more, we would not be seeing what we're seeing today." Nass said, "If they were arrested vigorously, I believe that would slow them [protesters]."

Maybe if we reversed that, and protested "more vigorously," it would slow Republicans down, if you know what I mean. Here's WKOW's coverage of this total asshole:

Even liberals I've talked to who don't follow this stuff as closely believe some of what they're hearing from Republicans is true, saying protesters are going to far. But of course that's not true. If lawmakers are uncompromising and condescending, the public won't like it. And they didn't statewide.

Creeping fascism is here, and the public is buying into the constant repetition; the middle class spent too much, felt entitled to good jobs, homes and generous safety nets, scammed fellow taxpayers of their hard earned money using food stamps and receiving unemployment. That's all we're hearing now, and soon, we'll think their right. Don't believe me? Check out the results of WKOW's online poll pictured here: 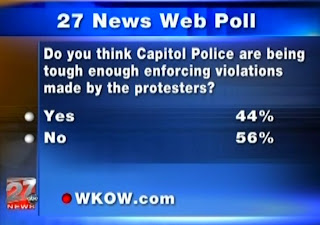