Republicans Daring Americans to "Vote us out." What does it take to Hate the GOP?

Are we god damn barbarians? 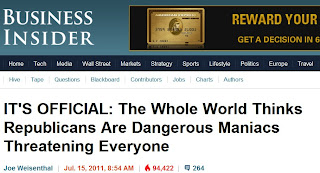 It's funny, no matter what the Republicans say or do, they don't suffer any backlash.
They won an election based on saving Medicare and job creation, and once in, proposed ending Medicare as we know it and haven't created any jobs or jobs bills.
Yet there still in the race, and even winning in some polls.
Who would be suicidal enough to propose the following, without knowing full well it pretty much destroys any competitive advantage, and future we might have in the global economy:

But who can explain the reasons for the "riders" that would remove any safe guards the government (that's us) is supposed to us from:

The measure is laced with conservative policy "riders" opposed by Democrats that would affect worker protections under federal labor laws and block the Education Department from enforcing rules on for-profit colleges that are often criticized for pushing students to take on too much debt.

Why should we be able to protect ourselves with our own government? Are Republicans trying to intentionally hurt us? All for just $4 billion?

The measure would cut heating subsidies for the poor by $1.3 billion, or 28 percent, despite demand elevated by the weak economy and high heating oil prices.

It's obvious the unemployed and underemployed are too lazy to pay their bills, so this just disciplines them for their lousy lives.