Gov. Walker and the other whiny Republican liars that fill our state Capitol, continually fear monger and warn that someday the government will ration health care, picking winners and losers.
So what are our Republican legislators thinking about doing; rationing government health care. Anyone else notice? 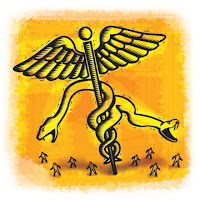 jsonline: To help address a half-billion dollar shortfall in the state's health programs, Gov. Scott Walker's administration is seeking to shift hundreds of thousands of state residents to lower-cost state plans or to private plans … state Health Services Secretary Dennis Smith said that the state would … look instead at efforts like shifting 230,000 state Medicaid recipients into a lower-cost plan with fewer benefits.

Government rationing of health care, by Republicans right? They were warning us about…themselves.


As part of its reform package, Wisconsin submitted two waiver requests to the federal government that would allow the state to push some families with an offer of employer coverage off the rolls and require “young adults between the ages of 19 and 26 to join their parents’ insurance plans“:Of course, young adults are only be able to join their parents’ policies thanks to a provision in the Affordable Care Act, which the state is challenging in court and has undermined at every turn. Now, Wisconsin officials are seeking to take advantage of the law in order to soften the cuts to their Medicaid program.

If they look deeper into the measure — and move beyond their rhetoric about government takeover and one-size-fits-all — they may even discover that they can solve their “dwindling federal funding” problem by accepting health reform’s grants and the additional dollars that will come with Medicaid expansion.