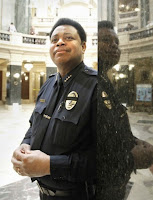 Who made this SOB dictator? If Rep. Steve Nass' juvenile display of arrogance and lack of respect for the law enforcement doesn't result in citizen and media criticism at this point, then we're in real trouble. Big trouble.


Let's not lose sight of the fact that Capitol Police Chief Charles Tubbs watched over a peaceful protest...PEACEFUL PROTEST, resulting in only a few minor arrests over a two month period. No vandalism, no thuggery, no fights! So what's eating away at Nass? If it's not Tubbs' race, what could it be? Not enough cracked skulls? What Republican lawmakers were assaulted or injured that would call for a review? Should Tubbs jurisdiction extend into nearby by bars for that occasional beer shower?

WKOW: Rep. Stephen Nass (R-Whitewater) is calling for the review that could result in a possible removal from Tubbs' position. The review has been called for following some liberal protestors in Madison getting aggressive with Republican lawmakers. Rep. Nass says, Chief Tubbs is the person to blame for this increase in aggression, because he's gone out of his way to go easy on protesters occupying the Capitol for weeks earlier this year. Nass wants Tubbs removed from his position if it's found that he neglected his duty of keeping lawmakers safe.

Nass wants Chief Tubbs removed because he had gone "out of his way to go easy on protesters."
Gives you a real good feel for "democracy" as envisioned by our authoritarian Republican administration.

The shocking video below, produced by the radical right wing think tank MacIver Institute, under cuts its own attempt to vilify Tubbs with a frightening look at the dictatorial rantings of Nass, and non-violent protesters being hauled away for recording the Assembly with hand held cameras. :

The irony is that the MacIver Institute supposedly "promotes free markets, individual freedom, personal responsibility and limited government." What you just saw was anything but.

When Tubbs met with protesters and other law enforcement leaders, the emphasis was on making sure demonstrations stayed peaceful and dialogue between police and demonstrators stayed open....

Throughout the protests, Tubbs said he focused on a goal of “zero arrests.” He even discouraged protesters from playing or singing music that could cause a “negative environment,” suggesting instead patriotic songs, spirituals such as “We Shall Overcome,” even Motown hits.... Things threatened to get ugly ... on March 9...  But there was no violence and about 200 protesters were allowed to stay the night. The following morning, many left on their own. Others were carried out of the antechamber to the Assembly, where legislators were due to meet, amid chants of “Shame!”

“It was not a difficult decision,” Tubbs said. “We had to conduct government business.” Once again, there were no arrests....

And that bothers Nass?