Walker's Open for Business Plan a Sham: Unemployment Climbs Again, this time to 7.9%, private sector sheds 800 jobs. What a plan, what a sacrifice.

If you live the sword (open for business), you'll die by the sword: 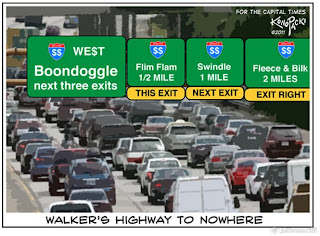 jsonline: Wisconsin lost an estimated 800 private-sector jobs in August from July, while the state's unemployment rate ticked higher to 7.9% from 7.8%, according to seasonally adjusted figures released Thursday by the state Department of Workforce Development.

Job losses also continued in the local government sector, which includes schools as well as city halls and county agencies across the state. Those local entities lost an estimated 1,800 jobs.

Will Walker again blame Congress? If he does, he'll be talking about the Republican majorities lack of job creation, and their continued efforts to hold our economy hostage. Go for it Scott.


UPDATE: Want to see how the Walker administration managed to spin the bad jobs numbers? You won't believe this radio report: