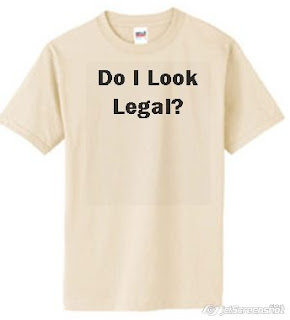 What a great idea! The students at Verona High School decided to protest the racist law in Arizona with a t-shirt that reads Do I look legal? But one parent didn't like the idea, protested, and got the sale of the t-shirts on campus stopped.

The story below is another one of those TV reports stations work so hard to put together, only to make them totally inaccessible for later viewing. I even had to make a facsimile of the t-shirt. Sorry, this has always been a sore spot for me since my early days in radio.

One interesting note: One caller to "Sly in the Morning" on WTDY observed that the t-shirt could infer the student is legally able to have sex. An interesting thought.

WISC Channel 3000: Some students at Verona Area High School wanted to sell a t-shirt they said was designed to teach … "I didn't think it was going to be that big of a deal," said VAHS junior Katherine Huete. Huete, who is a member of a school club called Latino Nation, said the group was initially approved to sell the t-shirt that said, "Do I look legal?" on the front and, "Oppose SB 1070" on the back … The group had taken 15 orders when members said they were told to stop selling.

Administrators, however, apparently suggested that the students sell the shirts outside of school and start a letter writing campaign. Student said they have followed that advice -- so far 150 shirts have been ordered, according to Huete.

Students told WISC-TV that school officials explained that if the district allowed the "Do I Look Legal?" t-shirt sale, it might set a precedent … "They gave us an example and said what if a student comes up and proposes an idea for shirts that say, 'Do I look gay? Do I look like a member of the KKK?,'" said Emmanuel Martinez … the students said they understand, but they wish the opinion of their peers -– not a parent –- could be weighed when deciding whether to allow the sale or not.