This is a little round-up of some conservative "droppings" spread around this news cycle: Newsbusters:

With Katie Couric drawing him out, New York City Mayor Michael Bloomberg agreed the Times Square car bombing was likely “homegrown” as he proceeded, in an interview excerpt run on Monday's CBS Evening News, to speculate it could have been placed by “somebody with a political agenda who doesn't like the health care bill or something. It could be anything.”

Could be “anything,” but the first thing Bloomberg thinks of are those who don't like ObamaCare, presumably conservatives or Tea Party activists.

Notorious NARTH member and vigorous gay adoption opponent Dr. George Rekers was caught by the Miami New Times as he returned from a ten-day vacation with a young male prostitute that he hired on Rentboy.com.

Rekers is a board member of the National Association for Research & Therapy of Homosexuality (NARTH), an organization that systematically attempts to turn gay people straight. And the Huffington Post recently singled out Rekers as a member of the American College of Pediatricians — an official-sounding outfit in Gainesville that purveys lurid, youth-directed literature accusing gays of en masse coprophilia. (In an email, the college's Lisa Hawkins wrote, "ACPeds feels privileged to have a scholar of Dr. Rekers' stature affiliated with our organization. I am sure you will find Prof. Rekers to be an immaculate clinician/scholar, and a warm human being.")

From Think Progress, if you ever wanted to know how crazy conservative voters are getting now, this should clear things up:

Guy in audience to Rep. Eric Cantor: My question is – and this is something I personally don’t understand – if it’s a naïve question then I apologize: in light of what Obama has done to leave us vulnerable, to cut defense spending, to make us vulnerable to outside enemies, and to slight our allies, how (pause) – what would he have to do differently to be defined as a
domestic enemy? (applause) 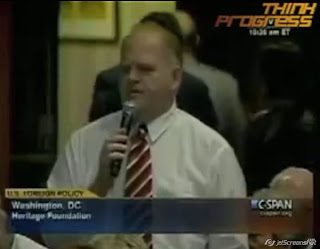 I couldn't resist this beauty from Rush at Media Matters: "Limbaugh: Obama "looks at people of color as the genuine owners of the world's wealth who have been shut out of it"". 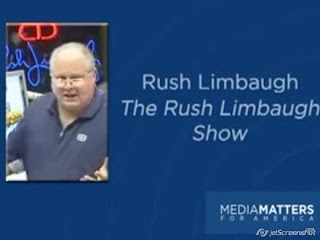