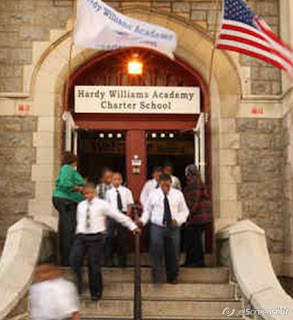 In another fine example of a won over Democrat for voucher and charter schools:

In his quest to be the Democrats' nominee for governor, State Sen. Anthony Williams is calling for expanding educational choice and targeting taxpayer funds to charters and other schools that produce results.

While never answering the question as to why people hate spending money on public schools but love sending it to private hucksters, see if you can see a shocking conflict of interest in the following paragraph:

But the Southwest Philadelphia charter school he founded as Renaissance Advantage in 1999 and oversaw as board chairman for a decade has experienced rocky times. The school, which Williams renamed Hardy Williams Academy in 2009 for his late father, was nearly closed in 2003 because of academic and management problems.

A state senator and possible Democratic nominee for governor, Williams has a vested interest in seeing taxpayer dollars going to charter schools. Well what do you know. And it's not doing well, surprise, surprise!

According to the district, the school did not meet the state requirement of 75 percent certified teachers, had turned in incomplete annual reports, and posted low scores. Academically, the charter has failed to meet federal No Child Left Behind benchmarks for the last three years. And, despite receiving taxpayer money, the school did not file federal tax returns for five years. Last school year, the school received $9.2 million.

And it gets much worse…

Williams, whose candidacy was boosted by $3.2 million in contributions from supporters of charters and school vouchers, pledged that the school would do better. He cited … a seasoned executive and an increasing number of certified teachers. The charter, which enrolls 807 students from kindergarten through ninth grade, has posted test scores that lag the state's and the district's. In 2009, 30.1 percent of the school's fifth graders were on grade level in math and 28.9 percent in reading compared with 52.4 percent and 40 percent in the school district. Statewide, the figures were 73.5 percent on grade level in math and 64.5 in reading.

So is it still true that parents really do know best, when it comes to sending their kids to charter and voucher schools, when you see Williams Academy fail so misrably?

Nonetheless, parents sing the school's praises. "They're getting a good education," said Charlene Madison, who has four children at the charter.

Is this a harbinger of things to come? The following should dispell any doubts:

Williams said he stepped down as board chairman in the fall because he felt it was time to hand over leadership. Dawn Chavous, his campaign manager, replaced him.