Got Deficit Problems, why not Cut Taxes and Spending? NO. The Answer: Give People Jobs. 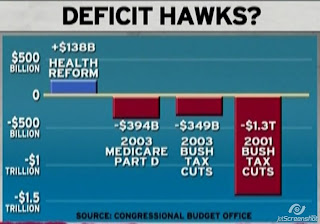 The Economic Policy Institute shocked me back to reality.

While I am constantly exposing myself to a lot of Republican rhetoric, a job I need a break from, I find that slowly but surely I too am drawn into the weeds and murky water. Think about it; Instead of proposing tax cuts to reduce the deficit, why not go to the source of the problem, the recession and joblessness. Dah! Notice too that the article points how horrific Rep. Paul Ryan's economic "Road Maps" is for our future. That's a rarity nowadays and a bit of honesty you won't get from the other media sources that continue to praise Ryan for his "courage."

EPI: Deficit reduction begins with getting people back to work. "The large deficits of the last couple of years are largely a result of the recession, which has dramatically reduced tax receipts and increased the need for many government services," EPI President Lawrence Mishel said in a statement on April 27, issued ahead of the first meeting of President Obama's National Commission on Fiscal Responsibility and Reform.

"The first step toward reducing the deficit, therefore, is getting Americans back to work. It is shameful to permit concerns about the deficit to stop much-needed investments in job creation at a time when so many Americans want and need a job." Mishel stressed … "It is important not to let the rhetoric outrun the facts."

Rep. Paul Ryan, who also participated on the panel with Mishel, argued that the country's existing social insurance system would not be sustainable in the 21st century. Ryan, a member of the National Commission on Fiscal Responsibility and Reform, is the author of the Roadmap for America's Future, which outlines a series of budget reforms, including large cuts in Social Security and Medicare benefits. In March, the Center on Budget and Policy Priorities published an analysis of Ryan's budget proposals finding that they "would result in a massive transfer of resources from the broad majority of Americans to the nation's wealthiest individuals."

Deficits and interest rates: No clear connection … In his new paper, Budget Deficits and Interest Rates, EPI economist Josh Bivens explains the fallacy of that argument and shows that, as long as private demand for new borrowing and spending is weak, higher interest rates are not likely to result.