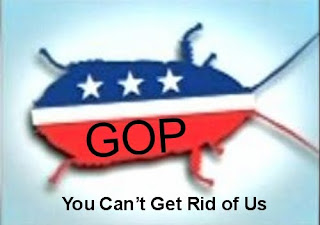 Republicans are no longer disguising their ties and allegiance to a pure corporate America.

Washington Post: Former House Speaker Newt Gingrich said he believes there is a 50-50 chance the federal health care reform bill will be fully repealed in 2013, if President Obama is defeated … he said that if a Republican majority takes over the House or Senate, he would advise them to defund the initiative and stop reform effort.

"Remember, you don't have to repeal the bill," he said. "You can just have an appropriations rider that says no money can be spent to implement it."

What a plan. It's so unfair to take insurance company profits and lower them for the benefit of…the people. Who's government serving anyway, an ideological theory of free private markets, or government by, for and of the people? Oh, you think this is just me ranting liberal socialist dogma again? Sorry, but the following sentence pretty much says it all about Republican interests.

Gingrich's comments came at a health-care industry sponsored conference held by Center for HealthTransformation, a project of his consulting firm.

So not only is Gingrich cow-towing to the health care industry interests with talk of repeal, he's consulting with them. Is that what the founding fathers were talking about?
Posted by John Peterson, Democurmudgeon at 5/15/2010 05:53:00 PM